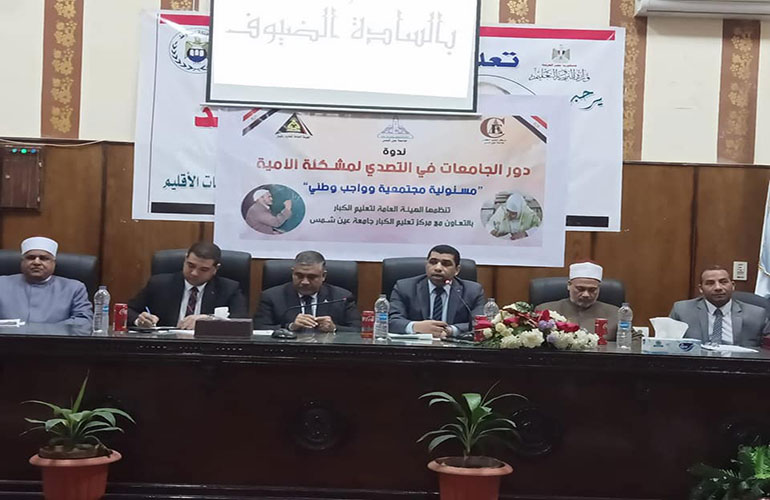 The Adult Education Center of Ain Shams University, in cooperation with the General Authority for Adult Education, organized a seminar entitled "The role of universities in addressing the problem of illiteracy," a social responsibility and a national duty "at the conference hall of the Directorate of Education in Assiut Governorate, within the activities of the second day of the comprehensive development convey of Ain Shams University in Assiut Governorate.

The symposium addressed the most important ways to activate the role of the university and its partners in support of literacy programs.

The symposium also discussed the university’s educational role in the necessity of confronting illiteracy to reject violence and extremism, supporting alphabetical and digital literacy programs, the role of the Ministry of Endowments in the Governorate in literacy through the imams of mosques, how the Azhar region in the governorate cooperated in the issue of illiteracy and opening the doors of its literacy institutes, and ways of the contribution of the Education Directorate Education in the governorate in the face of illiteracy.

It is worth noting that the development convoy witnessed the holding of placement tests for applicants for immediate testing in the village of Al-Nakhilah, in addition to the submission of 68 citizens requesting the issuance of a literacy certificate, in addition to signing contracts to open 23 chapters for literacy under the free contract system and handing out 43 illiteracy certificates for those who are free from illiteracy.

Inauguration of the literacy project headquarters at Faculty of Al-Alsun

The future of the Middle East region, Egypt Vision 2030, at a conference at Ain Shams University